We fix Windows PC's and Apple Computers, and we custom-build computers, PC Tech can provide the IT services you need when you need them.

Spyware & Virus Removal
Our experienced technicians at PC TECH are extremely educated in all types of viruses and spyware
System Tune Up
At PC TECH, we have performed tune-ups on thousands of computers, using professional-grade software and years of experience
In-Store/On-Site Repair
Our trained technicians will come to you if you need immediate assistance and are unable to come into the store 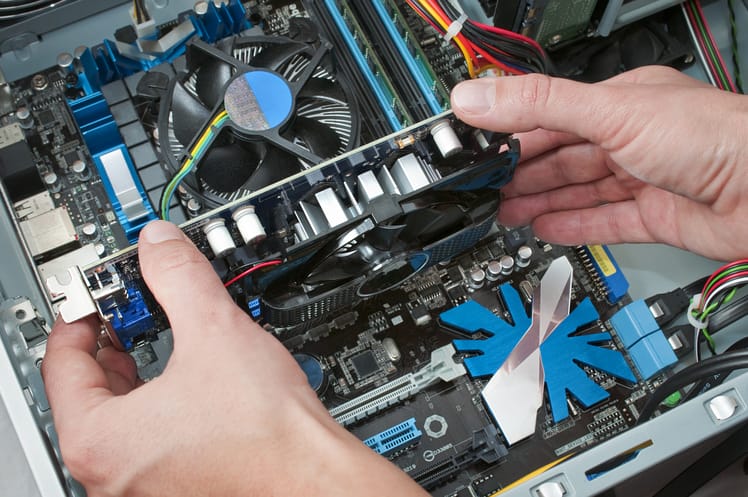 Computer Upgrades? If your computer isn’t running as fast as when you first got it, then you may be due for an upgrade or maintenance. Upgrades, such as adding more memory to your pc, increase your computer’s speed. Maintenance, such as getting a tune-up and a physical cleaning, is recommended to prevent future problems and make sure your device stays running like new.

Why is it important to let a professional service this for you?

Upgrading your computer usually involves opening up the computer and physically touching its components. If this is not done by a professional, you run the risk of damaging internal components and causing costly repairs.

How can PC Tech help?

Our technicians are extremely educated in all kinds of brands of software. This ensures that your upgrade will be installed correctly and that your computer will run to the best of its ability.

Upgrading a PC? Your choices range from installing more RAM to custom building a case designed for a DIY liquid cooling system. Which upgrades are the best depends on your PC. What specs does it have right now? Are you gaming, editing 4K videos, or just browsing the web?

Here are five common PC upgrades and which systems will see the most improvement from them. We’re also marking how hard we think these various upgrades are. Most are easy to do, though some might take a little more thought and planning than others.

Device type: Desktop or laptop
This is the classic rudimentary upgrade that makes a dramatic difference—especially for aging systems. If your laptop or desktop computer is running off a hard drive, then grabbing a 2.5-inch SSD will make a big difference. Your PC will feel more responsive, and boot times can shorten dramatically. Given the current state of flash storage, you’re probably better off with a triple-level cell (TLC) drive than quad-level cell (QLC).

If you’re already rocking a 2.5-inch SATA-based SSD, the next step would be upgrading to an NVMe M.2 drive. This will also improve general responsiveness and boot times, but not as dramatically as with a hard drive.

M.2 drives come with one caveat: Your PC needs a special M.2 PCIe slot. Most modern desktop motherboards should have it, but laptop capabilities will vary a lot. Check your motherboard or device manual to see if your system supports these drives.

Device type: Desktop or laptop
Should you add more RAM to your setup, or will it be a pointless exercise? That depends a lot on what you’re doing. If you use a PC to stream video, write documents in Microsoft Word, and edit the occasional photo, then 8 gigabytes (GB) might be all you need. Gamers will often be happiest with at least 16 GB, especially when playing modern AAA video games.

Then there are media-rich tasks. If you’re getting into serious video editing as a hobby, 32 GB of RAM might be ideal.

The bottom line is there’s an optimal amount of RAM your system needs to do its job. If you add more RAM beyond that, you won’t see much improvement, if any.

Using these general guidelines, you should be able to estimate how much RAM you need. If it’s not enough, then try doubling it and see how that goes.

Also consider the limits of your motherboard and CPU. They can handle only a certain amount of RAM—though it’s usually quite a bit. Remember that when you buy new RAM, it must all be the same speed (measured in MHz). Learn more in our guide to replacing your PC’s RAM.

Once you’re organized, changing RAM on a desktop is as simple as slotting in the new RAM modules and turning on the machine. Laptops are a little more complex and usually require opening an access panel on the bottom, or sometimes removing the keyboard. Be aware that some laptops cannot accept RAM upgrades at all because the RAM is soldered onto the motherboard’s PCB.

Swap Out Your Graphics Card

Device type: Desktop PCs
If you have the right amount of RAM in your system and your games are running off an SSD, the next step to improving performance is to upgrade the graphics card. Before you swap your GPU, ask yourself what resolution your monitor is. If you get a graphics card that’s awesome for 4K gaming but you only play at 1080p, then you could’ve done with a far cheaper graphics card.

If your CPU is particularly old, you might need a newer one before upgrading your graphics card. However, you can get surprisingly far with an older CPU combined with a newer graphics card. Besides, if it’s time to upgrade the CPU, then it’s likely time for a total system overhaul.

Once you’ve got a new card, undo the slot latch, remove the old card’s power cable and take it out, slide in the new one, and reconnect the power, if your card requires it. Then you just have to install the card’s new drivers and you’re off to the races. For a more detailed look at the upgrade process, check out our tutorial on how to upgrade and install a new graphics card in your PC.

Device type: Desktop PCs
Upgrading your CPU is not difficult, but it’s harder than slotting in some new RAM modules or changing your graphics card. Before you decide to get a new CPU, check which models are compatible with your motherboard. The motherboard CPU socket must be compatible with the processor you want—the socket is the space where the CPU fits on a motherboard.

Beware, however, that CPU makers (particularly Intel) can have different versions of the same socket type. A SkyLake-compatible LGA 1151 socket, for example, is not compatible with the LGA 1151 sockets that Coffee Lake processors use.

In general, it’s better to upgrade your motherboard and CPU at the same time. However, at times, it will make sense to just upgrade the processor. For example, you might catch a really good CPU sale.

If you don’t upgrade your motherboard when changing the CPU, there are often some trade-offs—especially if the newer processors have more advanced features. Anyone with an AMD X470 motherboard, for example, could use a Ryzen 3000 CPU. However, they would lose out on PCIe 4.0 which both the CPU and motherboard must support.

Changing the CPU is a little different depending on whether you have an AMD or Intel motherboard. Essentially, however, all you do is remove the old CPU, gently drop in the new one, and secure it. Then it’s just a matter of attaching your CPU cooling fan or liquid cooling solution.

Upgrade difficulty: Intermediate
Device type: Desktop
Heat: It’s what keeps custom PC builders up at night, or at least awake enough to contemplate how to keep computer temperatures lower. Keeping your PC cool helps your components last longer, and makes it easier to overclock your system.

Standard air cooling fans are great, but there’s nothing like a liquid cooling system when you want to get serious about overclocking—or your PC is generally too hot all the time. An all-in-one (AIO) cooler is a good first step. These are pre-built devices that circulate liquid from a radiator to a block over your CPU. Installing an AIO cooler into an existing PC requires you to remove the current cooling fan and then get rid of any existing thermal compound on the CPU. Next, install the radiator into your case and place the cooling block over the CPU—thermal compound is usually pre-applied to the block. Fit a few cables onto your motherboard or the power supply and you’re good to go.